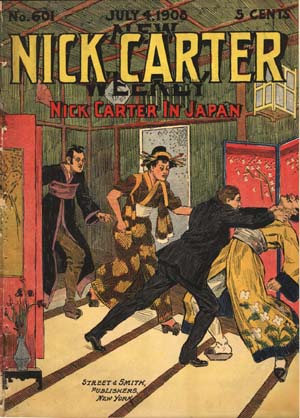 A Short History of the Dime Novel
The first American "dime novel" was created in June of 1860 when Irwin Beadle and his brother Erastus published a story called "Malaeska: The Indian Wife of the White Hunter." The story was an instant success - not because of the quality of the writing, but rather because of the flamboyant marketing and pricing strategies used. The Beadles' comic book-like creations were aimed at a less literate and poorer mass audience, in contrast with the typical novels of the time, which were aimed at an elite group of readers. The Beadles were able to offer titles for a dime, and in some cases even five cents, because the books were made of the newly available, cheap wood pulp paper (the original "pulp fiction"), using flimsy paper covers. The Beadles' company (later to become Beadle and Adams) soon faced competition from the likes of publishers such as Street and Smith and Frank Tousey.

It should be noted that, to avoid confusion, one usually speaks of the publishers of dime novels more often than one speaks of the authors. This is because authorship is often uncertain. Multiple authors using a single pseudonym wrote many of the titles in a series. Alternately, a single author might also employ different names for different titles or series.

The dime novel industry churned out series after series, title after title, creating some memorable characters such as "Deadwood Dick," "Nick Carter" (see image above) and "Buffalo Bill." The subjects of the early dime novels mostly dealt with sensational adventures on the Western frontier, owing much to the themes of James Fenimore Cooper, but eventually ended up going in the urban direction of the detective, science fiction, and athletic story. The product was aimed chiefly at young males, however there were attempts to create series for young women as well. The dime novel's peak popularity was reached in the last third of the 1800s, as more and more people began to have more and more free time. The success was not to last, however. Few new dime novels were published after World War I, and no new material was produced after 1920. Standing out among the various reasons from the dime novel's downfall was the advent of the motion picture, which cost less than a dime novel and was undoubtedly more exciting. No longer did audiences have to make the stories come alive themselves; they simply sat and relaxed while the stories were acted out for them on a screen.

No one would claim that dime novels represent high art. They were often hidden in barns or under mattresses, and many thought them immoral and even dangerous to the youth of society. More so than that, the novels were simply poorly written. Like the later radio dramas and Hollywood movies based on them, dime novels used worn, improbable plot formulas and cliche characters ("virgins, villains and violence"). What makes the dime novel interesting is that it mirrors the tastes, values and stereotypes of its era. And, one sees for the first time in dime novels a rejection of traditional European models of literature. Here American authors used American subjects and American settings in their fiction, and they were aimed directly at the American market using homegrown marketing strategy. The dime novel, for better or worse, had an effect on shaping American mass culture and therefore is an important aspect to the study of American arts, letters, and history.

The Walter F. Tunks Collection
Oberlin College Library's Special Collection of dime novels was compiled by Dr. Walter F. Tunks, the Rector of St. Paul's Church in Akron, Ohio for 23 years. Dr. Tunks was a well-respected churchman who helped to turn around St. Paul's in the years he served there. Besides being dedicated in his service to the church, Tunks was an enthusiastic collector of dime novels, and an avid fisherman. Tunks' collection is a valuable asset to the Oberlin College Library, consisting of approximately 4000 items. These are representative of the various genres and styles of dime novels over a publication period of about fifty years. It includes multiple issues from 225 different series, representing every prominent American publisher of dime novels and several British "penny dreadfuls." A few French and German dime novels are included in the collection as well. There are also some additional books, newspaper clippings, articles, bibliographies and correspondence collected by Tunks that may be of interest to scholars. Oberlin College received its collection of dime novels as a gift from friends of Walter Tunks, Mr. and Mrs. Paul G. Frank in 1959. Mr. Frank was also a Trustee of Oberlin College.

Boggs, S.S. Eighteen Months a Prisoner Under the Rebel Flag. Lovington, IL: Published by the author, 1887.

Hess Collection of Dime Novels at the University of Minnesota